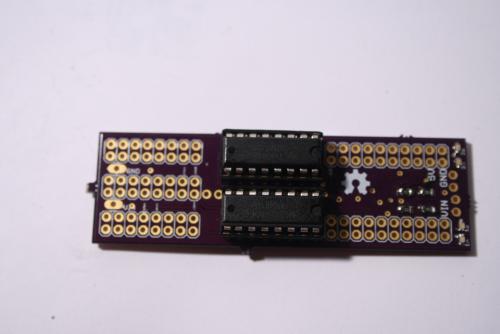 I finally got in my Mega Mini Motor (M3) shield that I designed. I was surprised, after populating the board: It actually worked. The board came about after making the Arduino Mega Mini. I noticed I wouldn’t really be reducing the bulk of my bot because of the amount of wiring it would take to get logic to the Arduino Motor Driver shield I was using. Therefore, I set out to design a motor driver shield that would plug right into the MegaMini. I broke out Eagle and some datasheets on an assortment of ICs.

I started out working with the L298D chip, but quickly got frustrated with the way it set on the MegaMini footprint. Plus, the flyback diodes were pissing me off. I had remembered reading that the SN754410 had internal ESD diodes. I started playing with the chip layout and got a board design I was pretty happy with.

I’ll attempt a full write up later;I’m pretty mentally fatigued from learning html/css (I know, easy. But as many know by now, cognitively, I’m as slow as a snail on salt.)