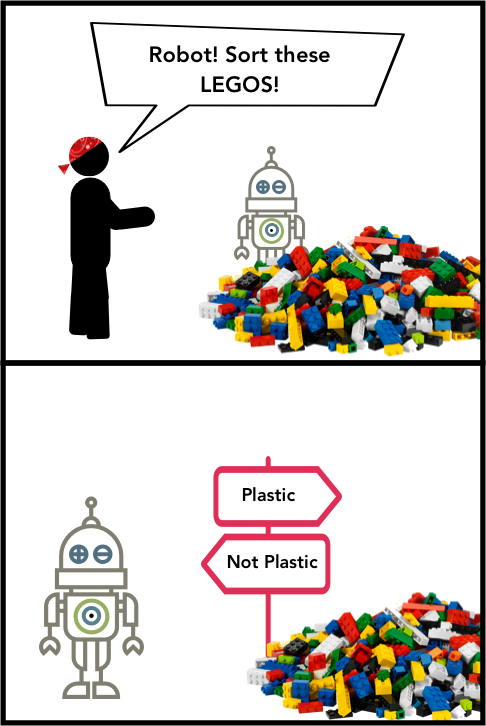 I’ve a robot friend. To be clear, the friend is not a robot, rather, we build robots together. One of the projects we tossed about is building a LEGO sorting machine. Rockets is the friends name–again, not a robot–teaches robotics to kids. For their designs, LEGOs are the primary component. Unfortunately, this results in much time spent to preparing for an event.

He mentioned to me, “What I really need is a sorting machine.” And proceeded to explain his plain for building one.

I was skeptical for some time, but finally, I got drawn in he talked about incorporating a deep neural-network. More specifically, a convolutional neural-network (CNN). I’d been looking for an excuse to build a CNN. This was a good one.

Anyway, these blog posts are our journal in build the LEGO sorter.

Before we get started, a note about this series: I won’t spend much time on explaining parts of the work where it is better documented elsewhere. Instead, I’m going to focus on stuff I’ve found everyone else omitting. Like, putting the neural-network to work. This one bugged me. Everyone loves to say, “Dude, my classifier has a validation accuracy of 99.999%!” That’s great, but as we found out, validation accuracy doesn’t always translate into production accuracy.

If you don’t want to listen to my rambling or want to do things the easy way, you can jump straight into the code using Google’s Colab:

This notebook is setup to download Rocket’s data and train the classifier. Thanks to Google for providing a GPU to train on and Github for hosting the data.

Or if you want to run the code locally, Rocket made the training data public. Just know, you’ll need a GPU.

Then jump to the code by clicking here.

It was pretty straightfoward to begin with. We’d find some images of LEGOs on the internet and then train a CNN to classify them by their part code. It was a bit naive, but that’s where must projects being, right? Hopeful naiveté.

Anyway, we searched the webs for projects like this, as we hoped they had prepared images. Google told us several folks doing similar work. I’m not going to list them all, only what I considered worth a read:

This is an extremely well documented project by Paco Garcia.

So, after reading a few articles, we figured we could do this. We just needed data. After a bit more searching we found the following datasets:

I wasn’t happy about these datasets. Their structures weren’t great and they were not designed to help train a classifier. But then, Rockets found Paco had actually opened his dataset to the public:

One bit more, Paco also made his code public:

Paco, you are a robot friend, too!

Alright, we were encouraged by Paco. We knew the project would be possible. However, we didn’t want to step on brownfield. We needed the green. Or if you don’t speak dev, we didn’t want to do this the easy way and replicate Paco’s work. We wanted to really beat ourselves up by doing everything from scratch.

As I stated before, I didn’t like any datasets but Paco’s. It was real images and meant to train a classifier. But, they weren’t the LEGOs we wanted to classify. Rockets’s LEGO projects involve a lot of technic bricks, which didn’t seem to be in Paco’s mix. So, we set out to create our own.

The first attempt creating training images was by rendering images from .stl files found on the internet using the Python version of Visualization Toolkit. I won’t cover it here since it was a fail and as I’ll create an article later about the stuff we tried and didn’t work. 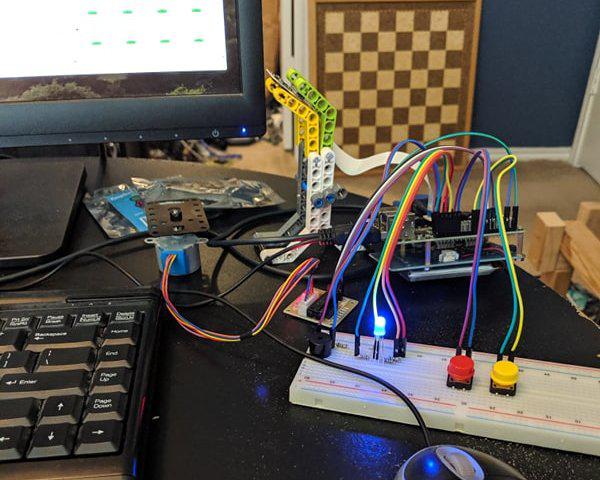 Anyway, while I was working on it Rockets had a brilliant plan. He created an instrument to take pictures of a LEGO on a spin plate. It used a Raspberry Pi, Pi Cam, and stepper motor, and unicorn farts.

Then Rockets began taking pictures of 10 classes of LEGOs. Not sure how long this took , but shortly he pinged me saying he had 19,000 images. (Ok, ok, he might be part robot.)

I’m not going to attempt explaining the build, as I believe Rockets will do this later. Besides, about the only part I understand is the unicorn flatulence.

Alright! Now I needed to get my butt in gear and fix up the software.

Before we could start training a CNN on Rockets’s images we needed to do some preprocessing. First, the images came in at full resolution, but we needed to crop them, as the CNN train better on square image. Of course, the image would need to be cropped as not to lose the target data (the LEGO). 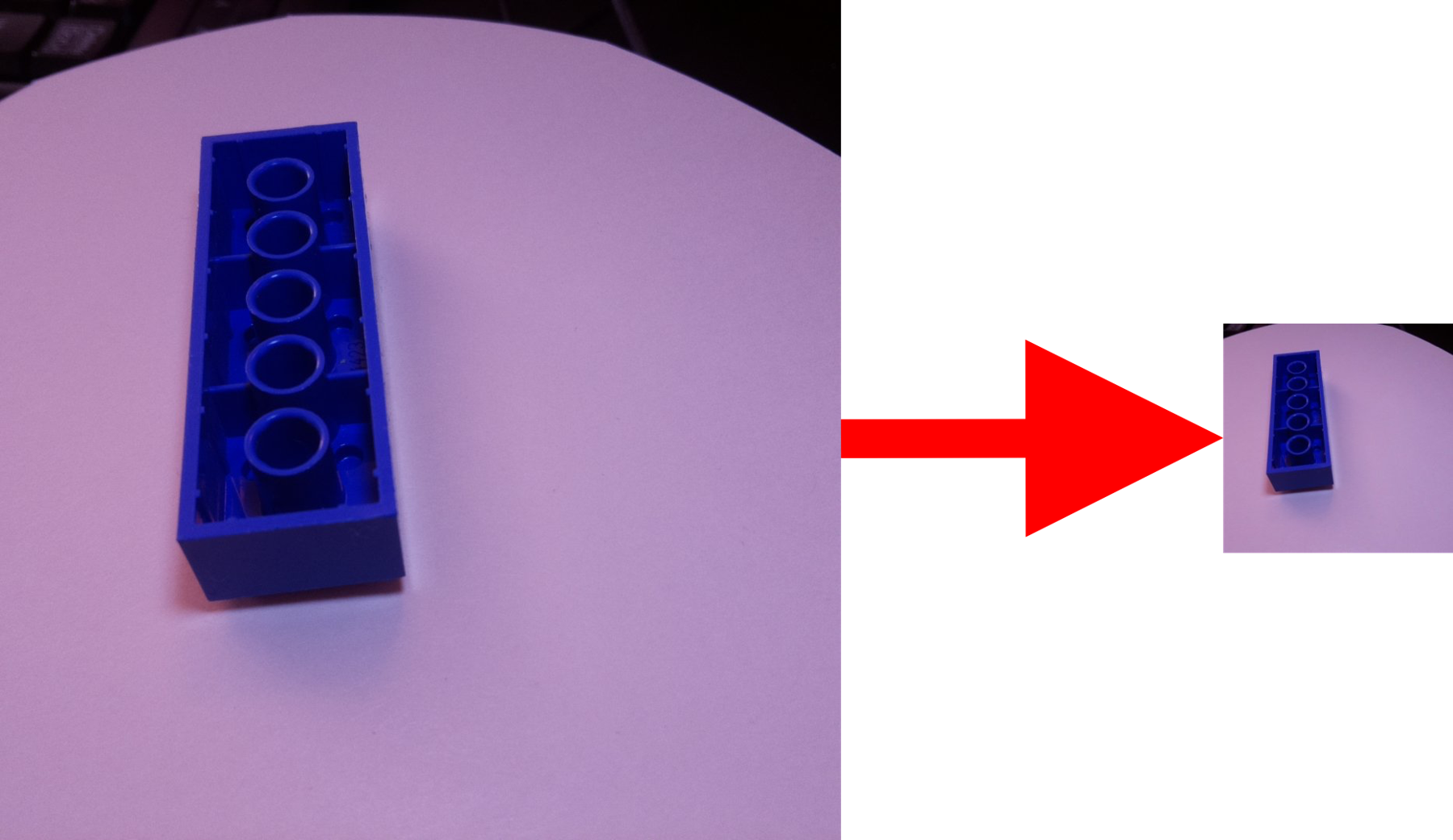 Also, the trainer would be expecting a file structure something like this:

Therefore, I’ve written a Python script to do the following

Let’s jump into the code.

The full code can found here:

But I’ll walk through the code below.

The only non-standard Python library we are using is:

This may be a bit tricky depending on which OS you are using and whether you are using Anaconda or straight Python. However, the following is what we used:

If you have any troubles load the cv2 library, it probably means there was an issue installing OpenCV. Just let me know in the comments and I can help debug.

The following control the the flow of preprocessing

Below is the main loop. It is going to repeat for every folder it finds in the the root folder.

This is the inner loop, it loads each of the image files in the class class folder, modifies it, and saves it to the output folders.

Fairly straightfoward. Just make sure to run to run the script from the main directory. For example

Or, if you don’t want to do it the hardway. Rockets has made his images available

Next, I’m going to dive into the Tensorflow CNN code. Stay tuned, my robot friends!