This article is part of a series documenting an attempt to create a LEGO sorting machine. This portion covers the Arduino Mega2560 firmware I’ve written to control a RAMPS 1.4 stepper motor board.

A big thanks to William Cooke, his wisdom was key to this project. Thank you, sir!

To move forward with the LEGO sorting machine I needed a way to drive a conveyor belt. Stepper motors were a fairly obvious choice. They provide plenty of torque and finite control. This was great, as several other parts of the LEGO classifier system would need steppers motors as well-e.g.,turn table and dispensing hopper. Of course, one of the overall goals of this project is to keep the tools accessible. After some research I decided to meet both goals by purchasing an Ardunio / RAMPs combo package intended for 3D printers.

At the time of the build, these kits were around $28-35 and included:

Seemed like a good deal. I bought a couple of them.

I would eventually need:

Luckily, I had the PSU and a few stepper motors lying about the house.

Wiring everything up wasn’t too bad. You follow about any RAMPs wiring diagram. However, I did need to make two adjustments before starting on the firmware.

First, underneath each of the stepper drivers there are three drivers for setting the microsteps of the respective driver. Having all three jumpers enables maximum microsteps, but would cause the speed of the motor to be limited by the clock cycles of the Arduino–more on that soon. 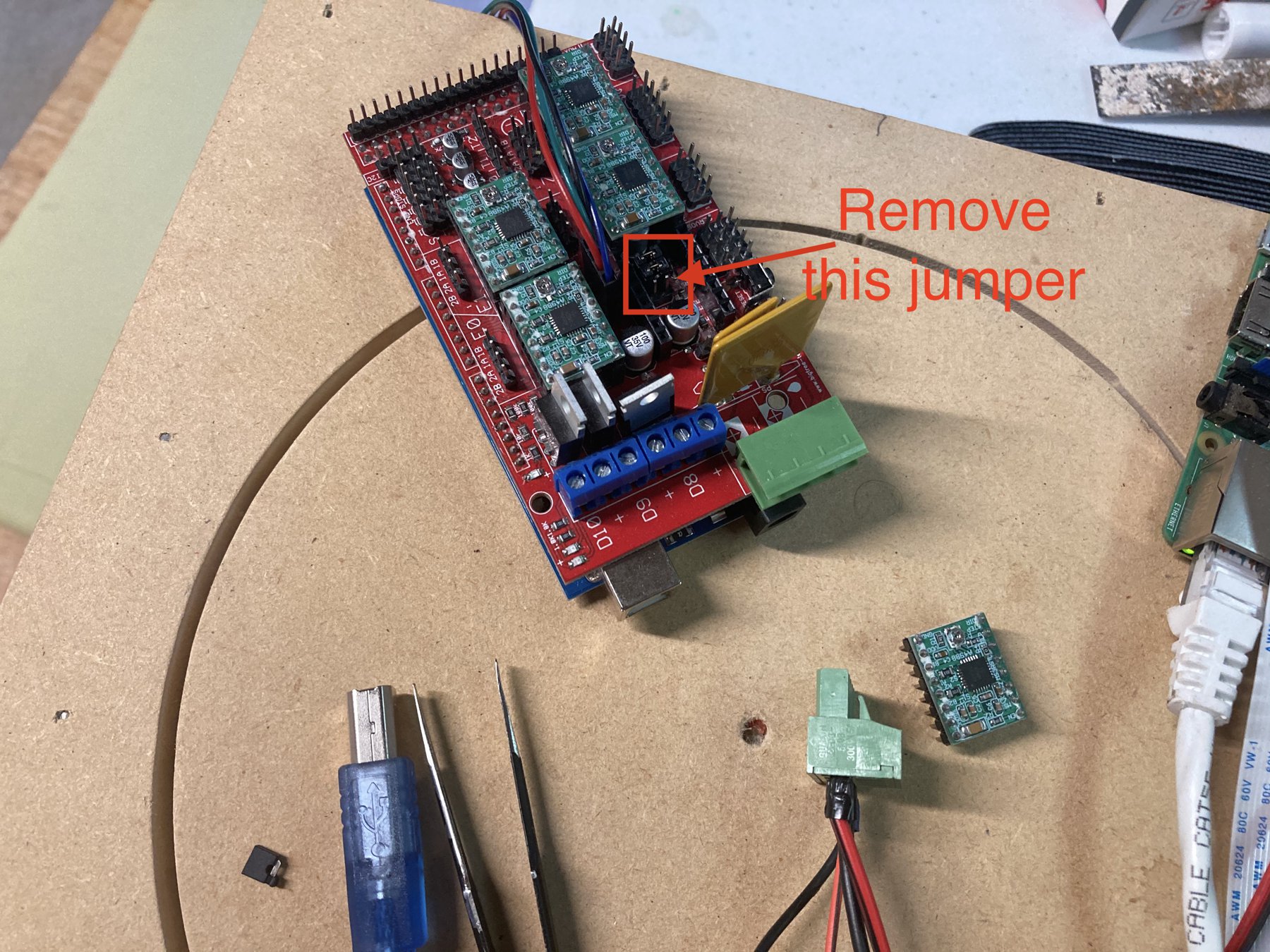 I’ve also increased the amperage to the stepper. This allowed me to drive the entire belt from one NEMA17.

To set the amperage, get a small phillips screwdriver, two alligator clips, and a multimeter. Power on your RAMPs board and carefully attach the negative probe to the RAMPs GND. Attach the positive probe to an alligator clip and attach the other end to the shaft of your screwdriver. Use the screwdriver to turn the tiny potentiometer on the stepper driver. Watch the voltage on the multimeter–we want to use the lowest amperage which effectively drives the conveyor belt. We are watching the voltage, as it is related to the amperage we are feeding the motors.

Anyway, I found the lowest point for my motor, without skipping steps, was around ~0.801v.

The your current_limit will vary depending on the drag of your conveyor belt and the quality of your stepper motor. To ensure a long-life of your motor, do not set the amperage higher than needed to do the job. 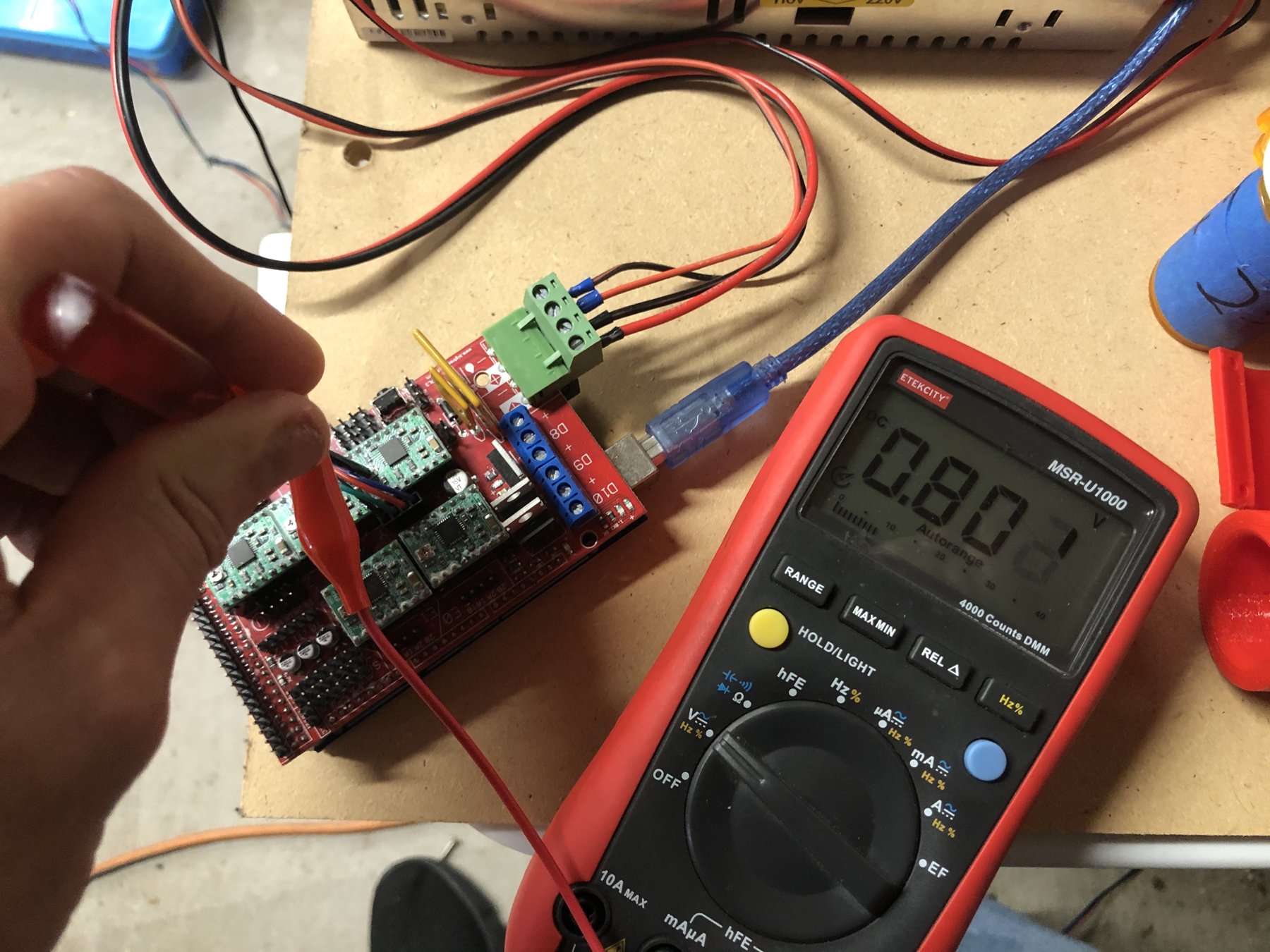 When I bought the RAMPs board I started thinking, “I should see if we could re-purpose Marlin to drive the conveyor belt easily.” I took one look at the source and said, “Oh hell no.” Learning how to hack Marlin to drive a conveyor belt seemed like learning heart surgery to hack your heart into a gas pump. So, I decided roll my own RAMPs firmware.

My design goals were simple:

That’s it. I prefer to keep stuff as simple as possible, unless absolutely necessary.

I should point out, this project builds on a previous attempt at firmware:

But that code was flawed. It was not written with concurrent and independent motor operation in mind. The result, only one motor could be controlled at a time.

The firmware follows this procedure:

Some code not in the main loop is the the UART RX handler. It is activated by an RX interrupt. If the interrupt fires, the new data is quickly loaded into the rxBuffer. If the incoming data contains a 0x03 character, this signals the packet is complete and ready to be decoded.

Each of these bytes are encoded by left-shifting the bits by two. This means each of the bytes in the packet can only represent 64 values (2^6 = 64).

Why add this complication? Well, we want to be able to send commands to control the firmware, rather than the motors. The most critical is knowing when the end of a packet is reached. I’m using the ETX char, 0x03 to signal the end of a packet. If we didn’t reserve the 0x03 byte then what happens if we send command to the firmware to move the motor 3 steps? Nothing good.

Here’s the flow of a processed command:

Note, the maximum value of the STEPS byte is greater than 8-bits. To handle this, we break it into two bytes of 6-bits.

Now, we have to shift all of the bytes left by two bits, this will ensure 0x00 through 0x03 are reserved for meta-communication.

This process is a bit easier to see in binary:

And back to hex:

Notice the last byte is not encoded, as this is a reserved command character.

And the serial handling as a whole:

When a packet is waiting to be decoded, the handleCompletePacket() will be executed. The first thing the method does is check the packet_type. Keeping it simple, there are only two and one is not implemented yet (HALT_CMD)

Code is simple. It unloads the data from the packet. Each byte in the incoming packet represents different portions of the the motor move command. Each byte’s value is loaded into local a variable.

The only note worth item is the steps bytes, as the steps consistent of a 12-bit value, which is contained in the 6 lower bits of two bytes. The the upper 6-bits are left-shifted by 6 and we OR them with lower 6-bits.

If the packet actually contains steps to move we call the setMotorState(), passing all of the freshly unpacked values as arguments. This function will store those values until the processor has time to process the move command.

Each motor has a struct MOTOR_STATE representing its current state.

There are five motor MOTOR_STATEs which are initialized a program start, one for each motor (X, Y, Z, E0, E1).

And whenever a valid move packet is processed, as we saw above, the setMotorState() is responsible for updating the respective MOTOR_STATE struct.

Everything in this function is intuitive, but the critical part for understanding how the entire program comes together to ensure the motors are able to move around at different speeds, directions, all simultaneously is:

micros() is built into the Arduino ecosystem. It returns the number of microseconds since hte program started.

The next_step_at is set for when we want the this specific motor to take its next step. We get this number as the number of seconds from the programs start up, plus the delay we want between each step. This may be a bit hard to understand, however, like stated, it’s key to the entire program working well. Later, we will update motorState->next_step_at with when this motor should take its next step. This “time to take the next step” threshold allows us to avoid creating a blocking loop on each motor.

As you might have noticed, the motor_y would not start moving until motor_x took all of its steps. That’s no good.

Anyway, keep this in mind as we start looking at the motor movement function–coming up next.

Getting to the action. Inside the main loop there is a call to pollMotor(), which loops all of the motors, checking if the motorState has steps to take. If it does, it takes one step and sets when it should take its next step:

This is key to all motors running together. By setting when each motor should take its next step, it frees microcontroller to do other work. And the microcontroller is quick, it can do its other work fast and come back and check if each motor needs to take its next step several hundred times before any motor needs to move again. Of course, it all depends on how fast you want your motors to go. For this project, it works like a charm.

We have the motor driver working. We now can control five stepper motors’ speed and number steps, all independent of one another. And the serial communication protocol allows us to send small packets to each specific motor, telling how many steps to take and how quickly.

Next, we need a controller on the other side of the UART–a master device. This master device will coordinate higher level functions with the motor movements. I’ve already started work on this project, it will be a asynchronous Python package. Wish me luck.