The last two articles have been getting oriented to SQL, however, the information in them will disappear quickly if we don’t give you a way to practice on data meaningful to you. Let’s face it, as much fun as it is to find out random employees salaries, those don’t mean anything to you.

This article will show you how to setup a copy of MySQL Server on your PC, connect to it, load data from a CSV, and query those data. There’s a lot to get done, so let’s get started.

Each of the three operating systems are a little different on how you must go about setting up a local copy of MySQL Server. Unfortunately, Windows is the most complex. Anyway, feel free to skip to the appropriate section

After you’ve downloaded it, open the the file. 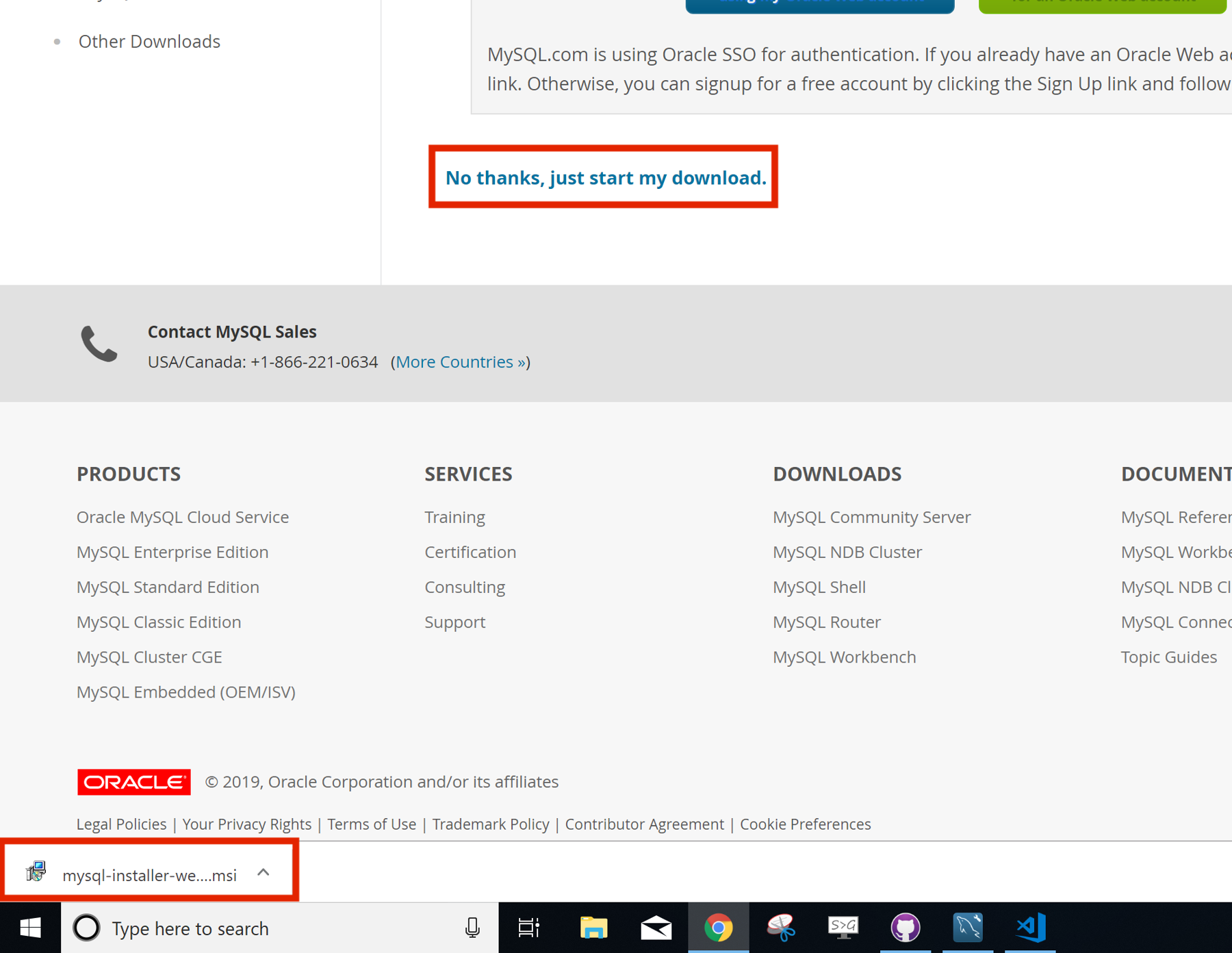 If you are prompted to “Upgrade” go ahead and say “Yes” 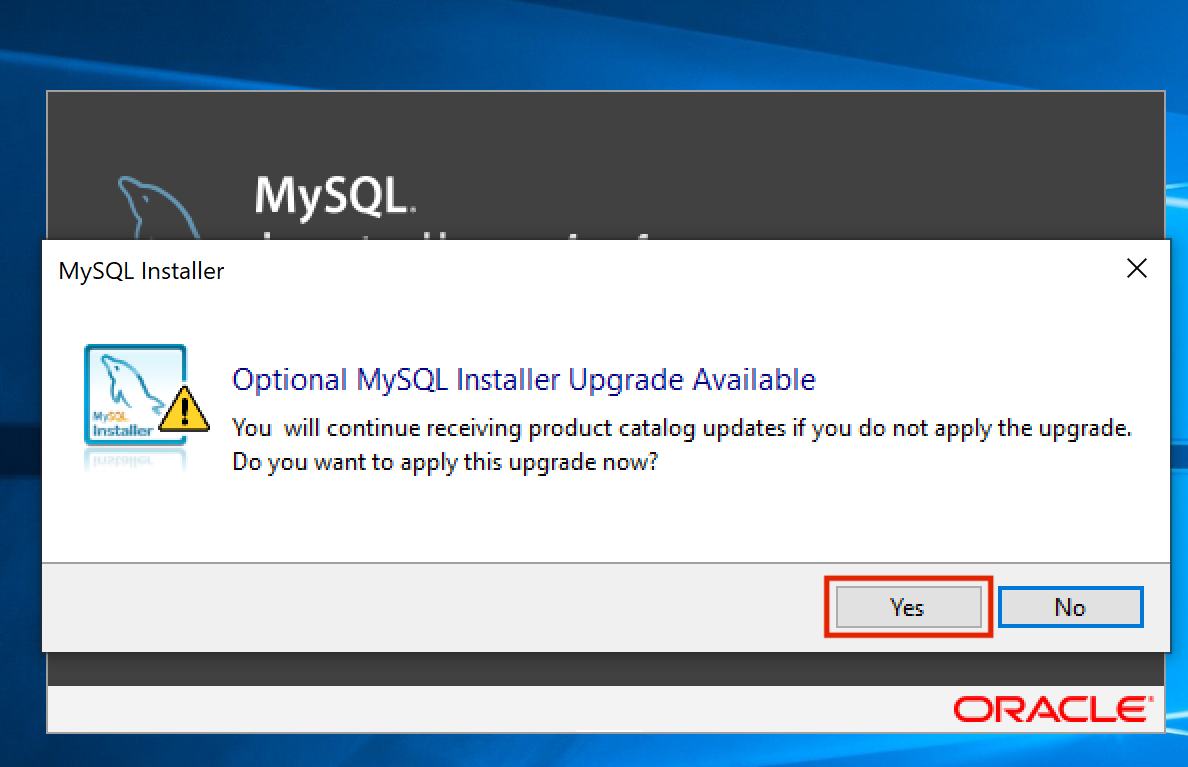 The installer is a bit confusing, but don’t worry, most everything is fine left on its default.

Click on MySQL Server then the Add button. Add “MySQL Server” and “Connector/OBDC x64.” Then click “Next.” You will see a Installation summary, click on “Execute” and wait for the download to finish and then install wizard to begin.

As I stated, most of the install wizard questions we will leave as default. 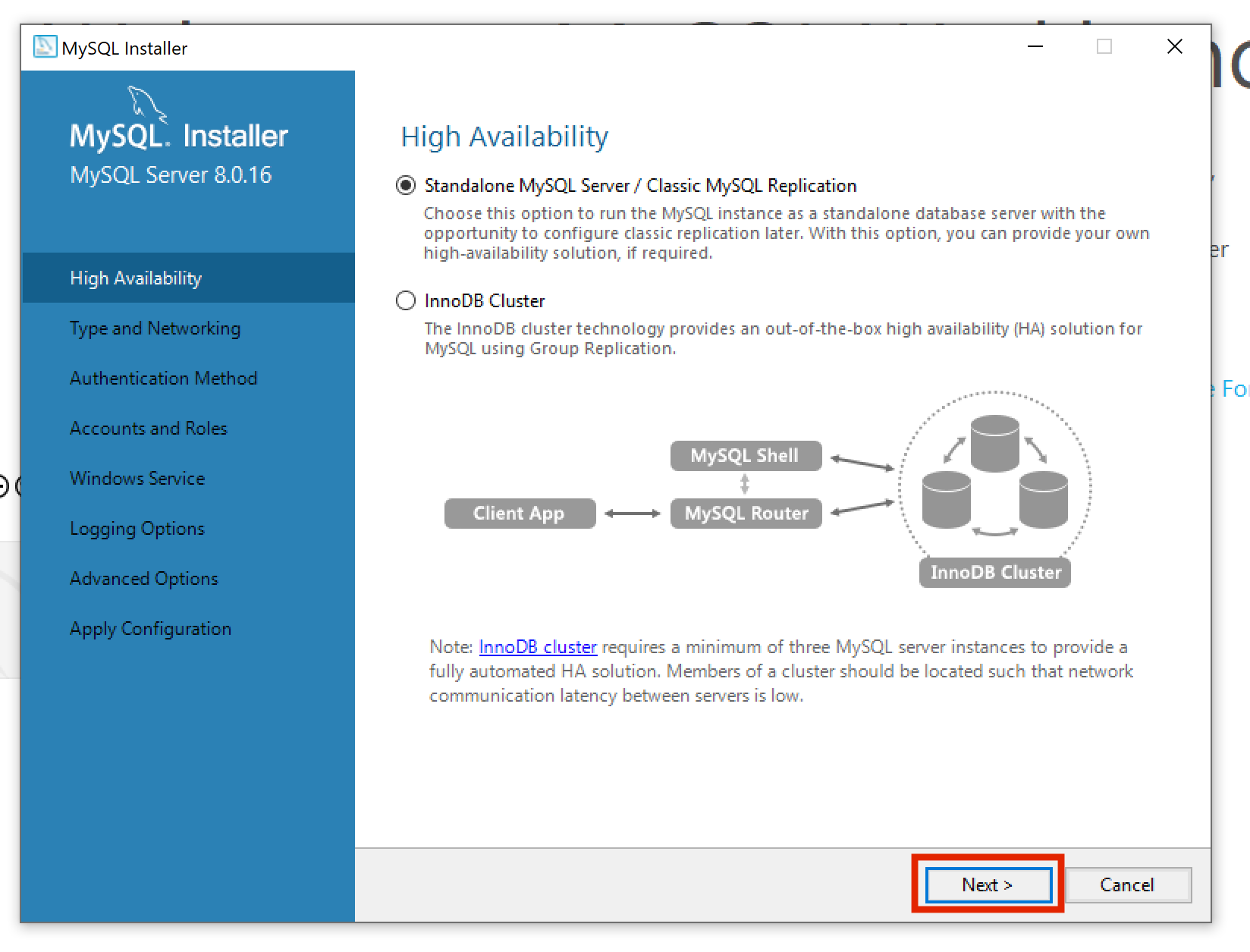 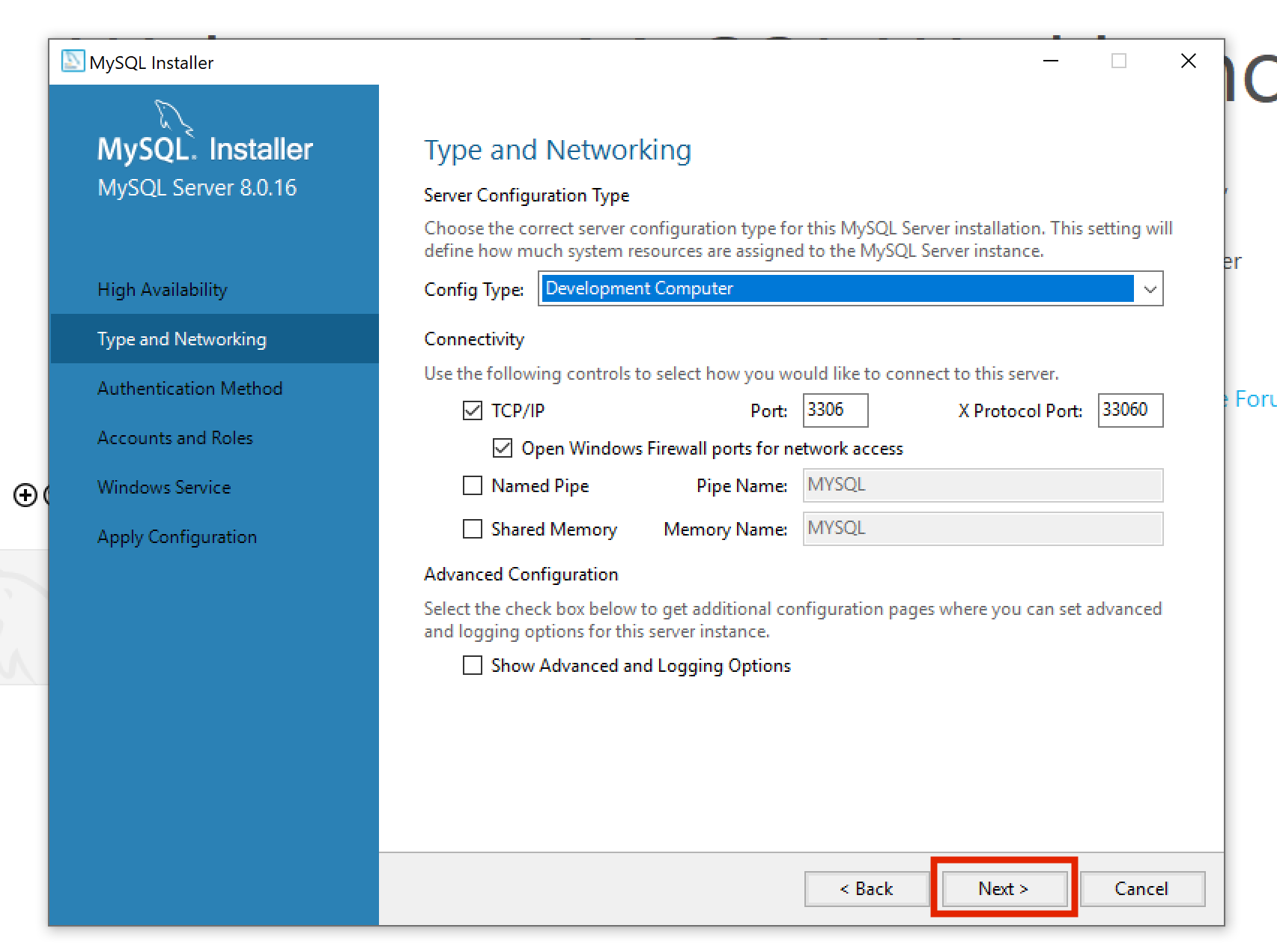 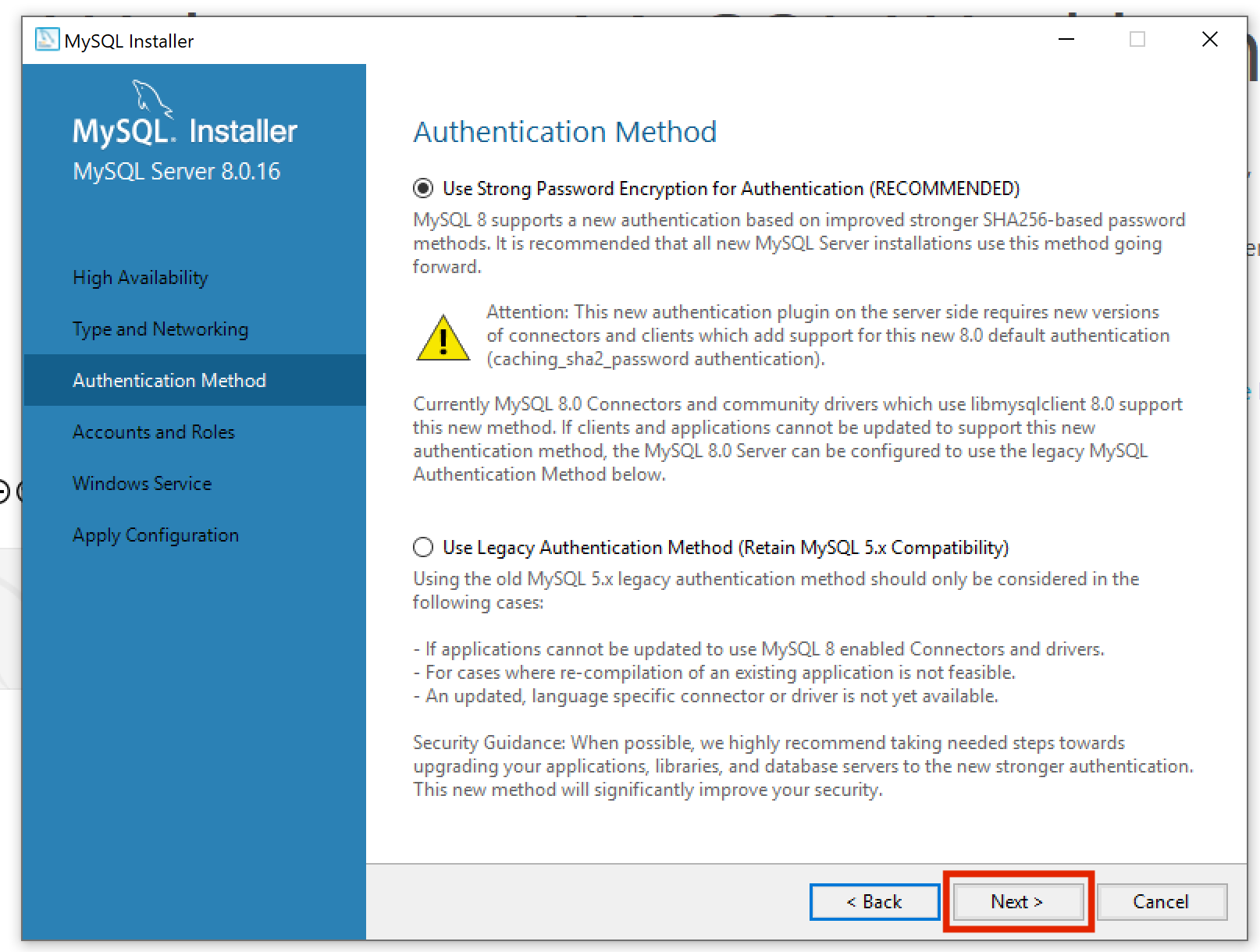 On the “Accounts and Roles” section you will need to decide on your password for the SQL Server on your local PC. I obviously didn’t pick a great one. MySQL Server will automatically setup a user with the name of root and a password you set here. This root user will permissions to do anything to the server. 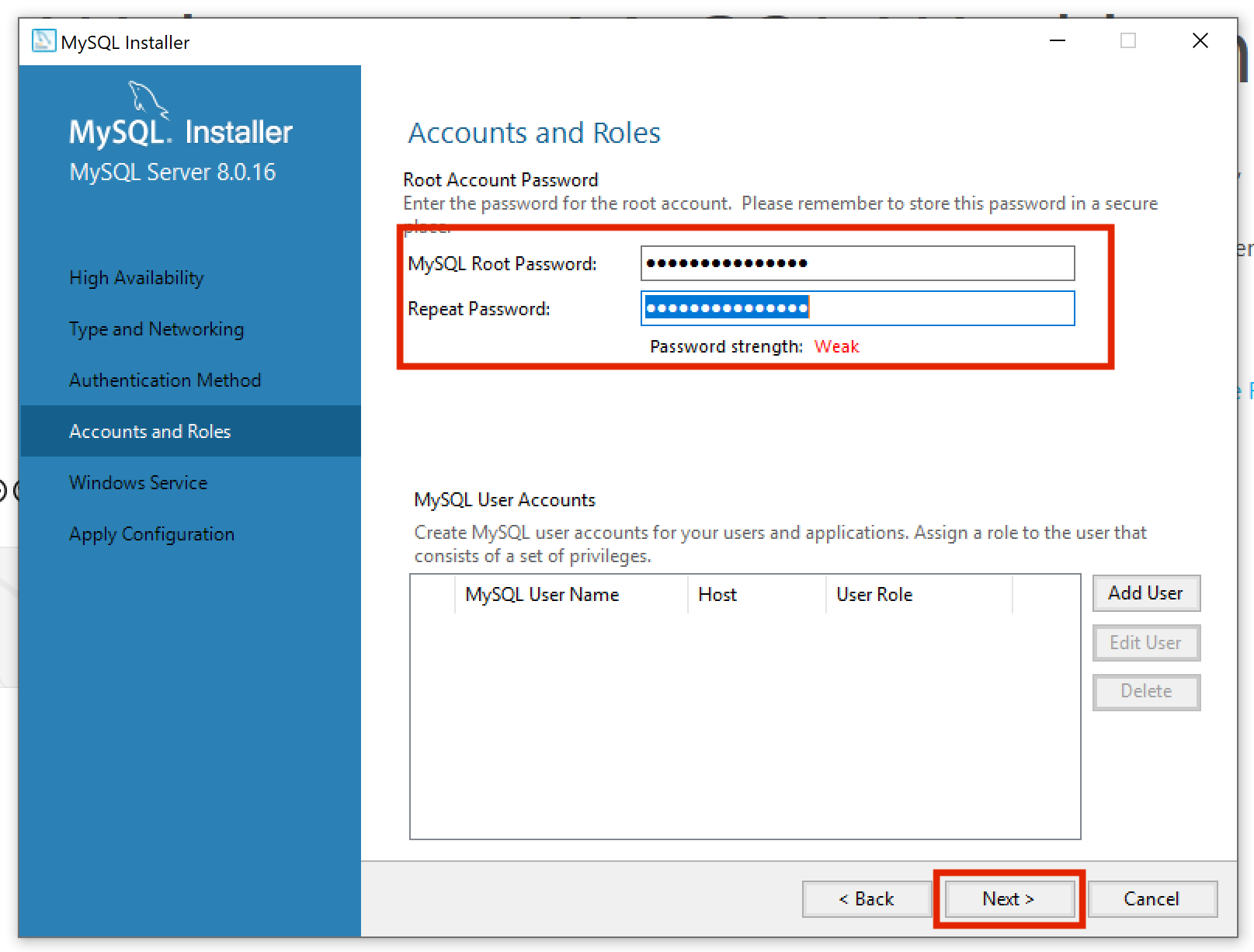 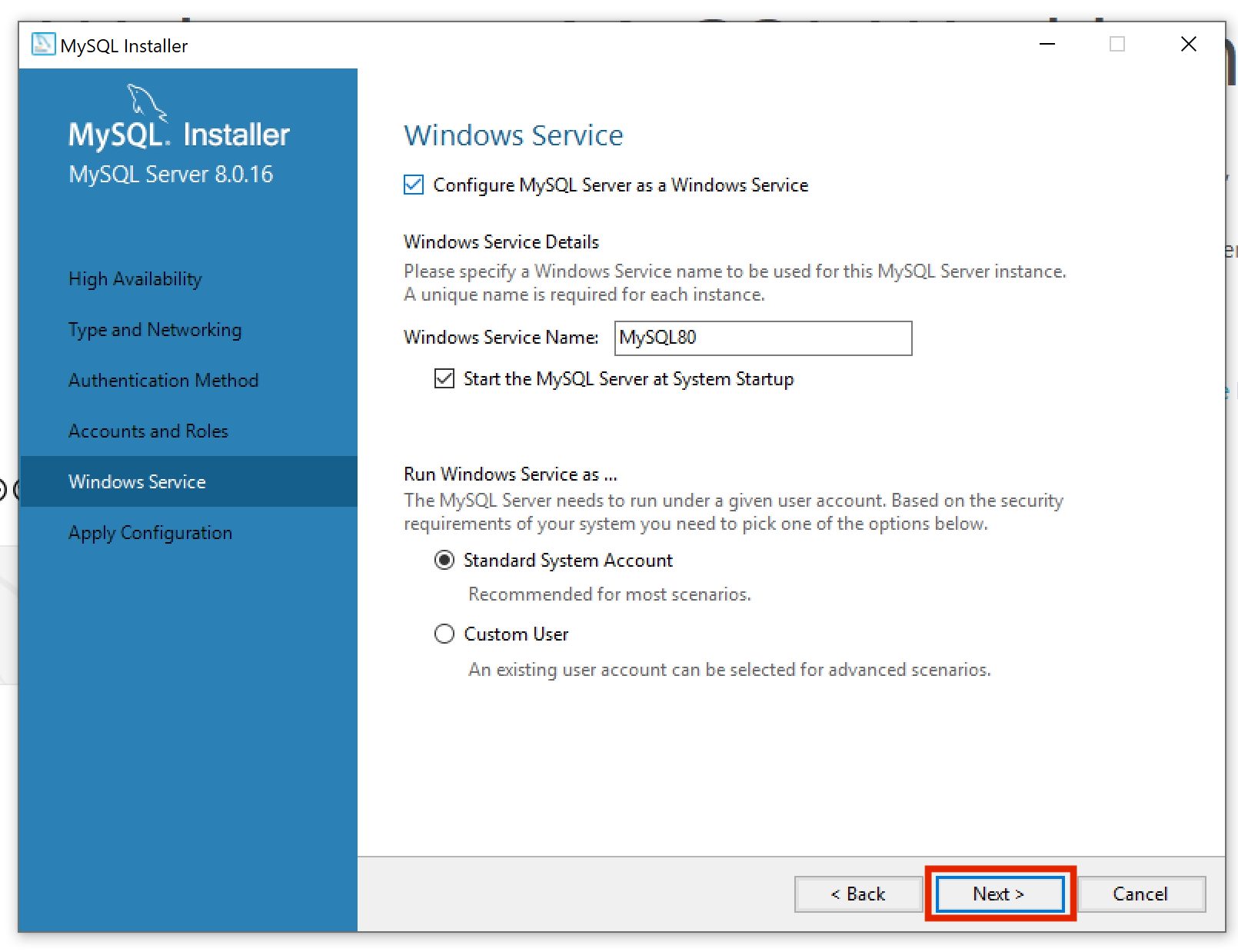 Execute the installer and let it finish. 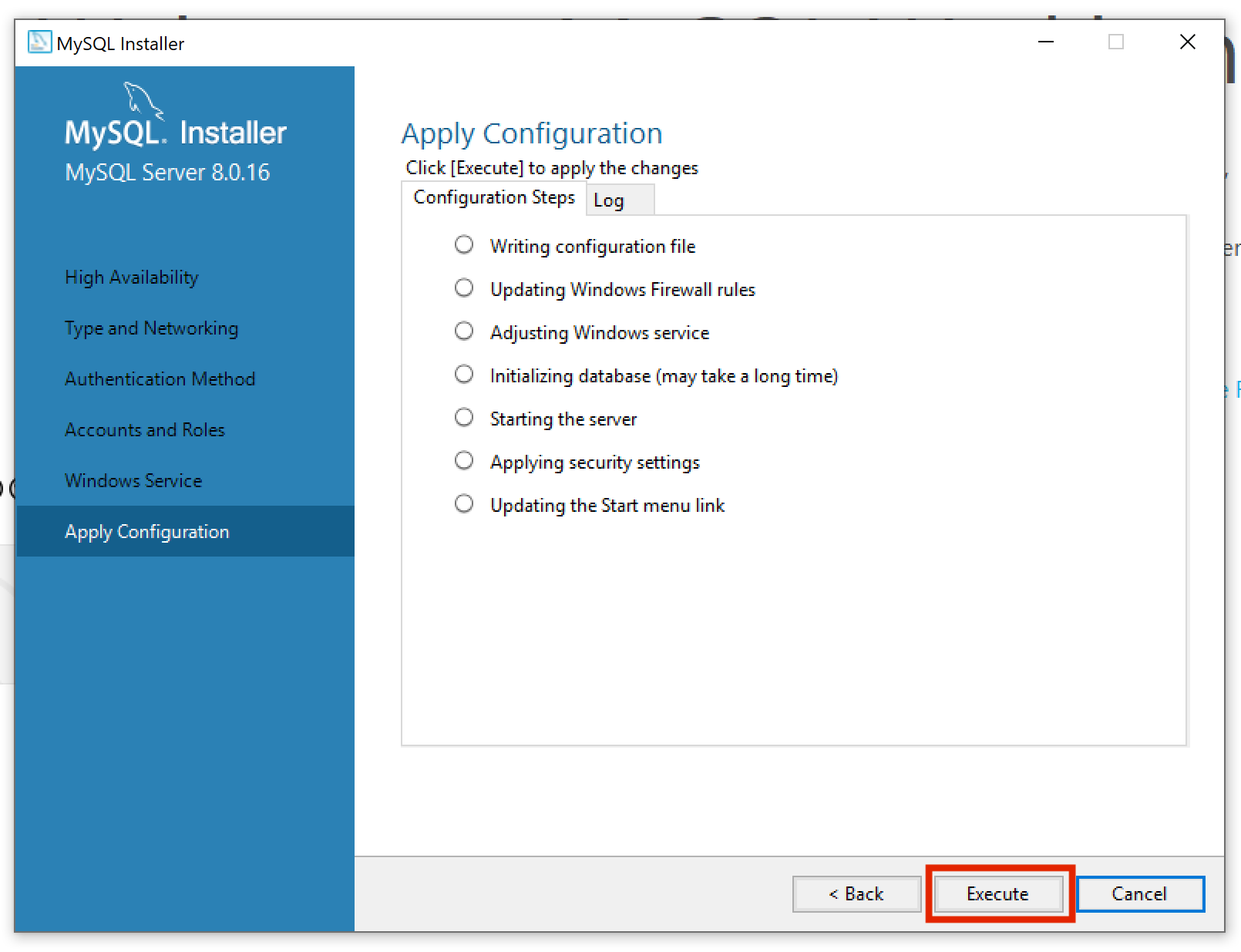 Once it finishes you should now have MySQL Server installed on your local PC. Skip to the last section to test it out. 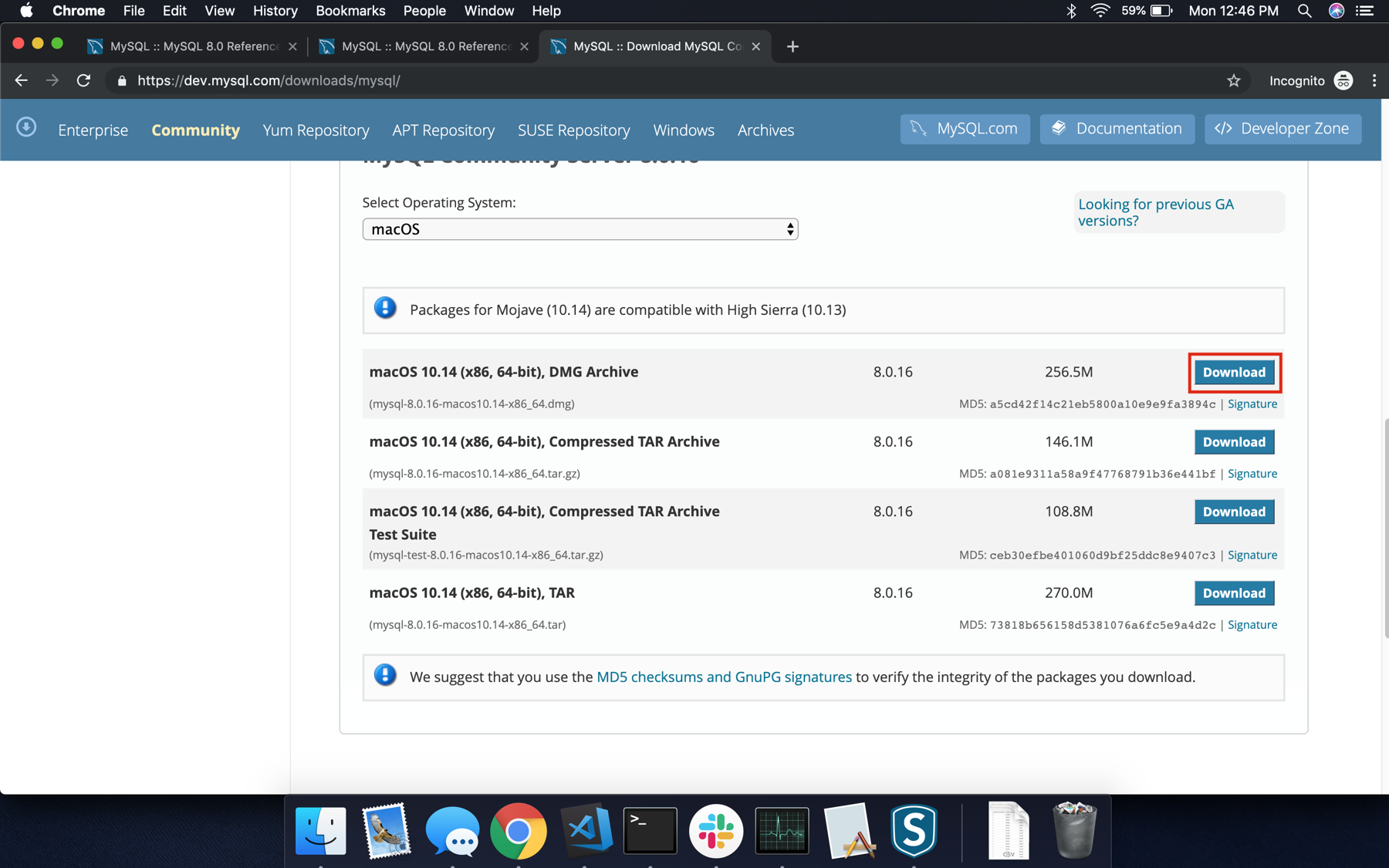 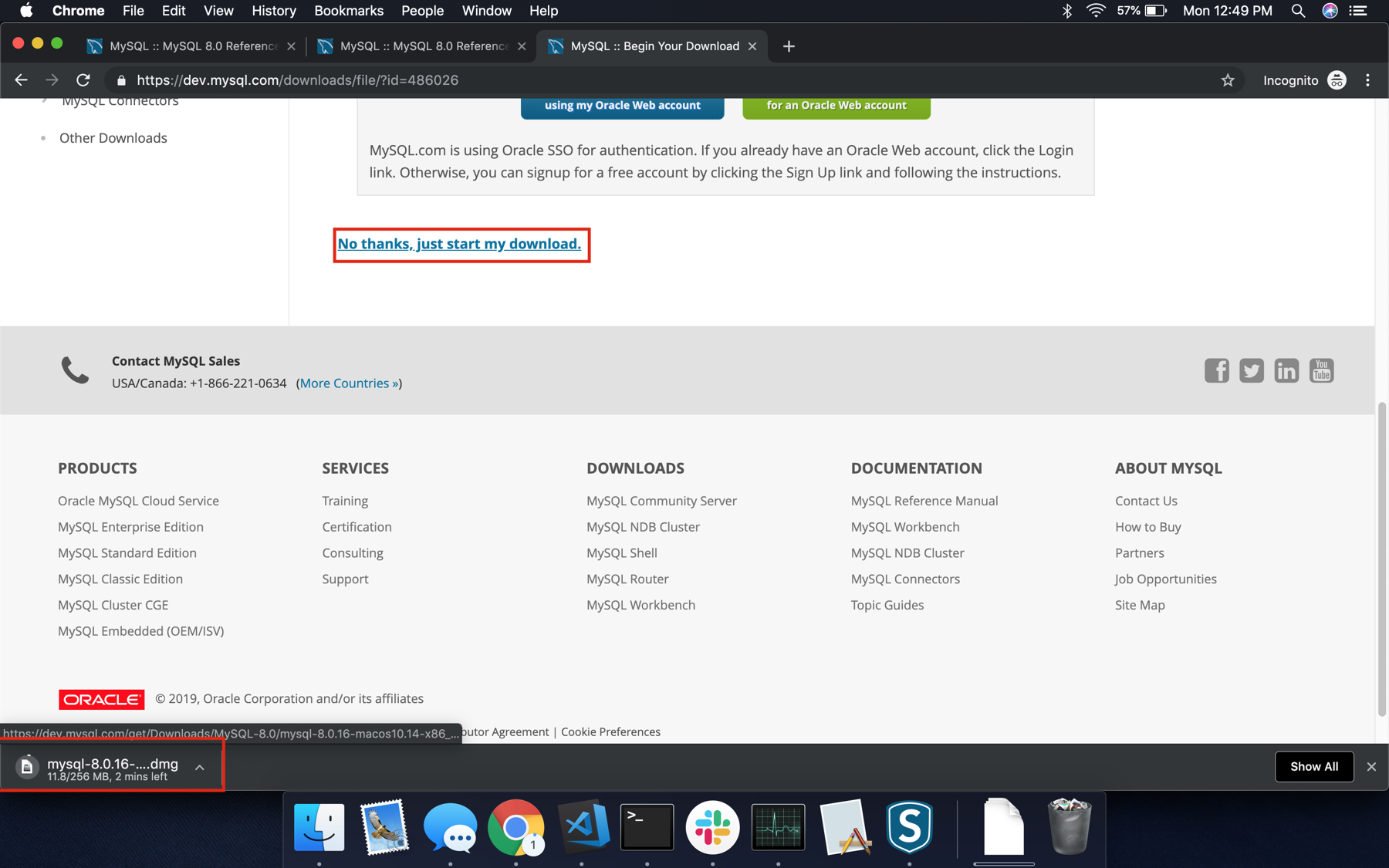 Double click on the installer. You will need to enter your system password for the installer to setup MySQL Server, but you will also need to provide the MySQL Server root user a password. Don’t consfuse the two, unless you plan for them to be the same.

Once it finishes you should now have MySQL Server installed on your Mac. Skip to the last section to test it out.

Go ahead and open MySQL Workbench and let’s connect to this new local server.

Click on the “New Connection” icon and leave everything default, except the “Connection Name,” here enter localhost. 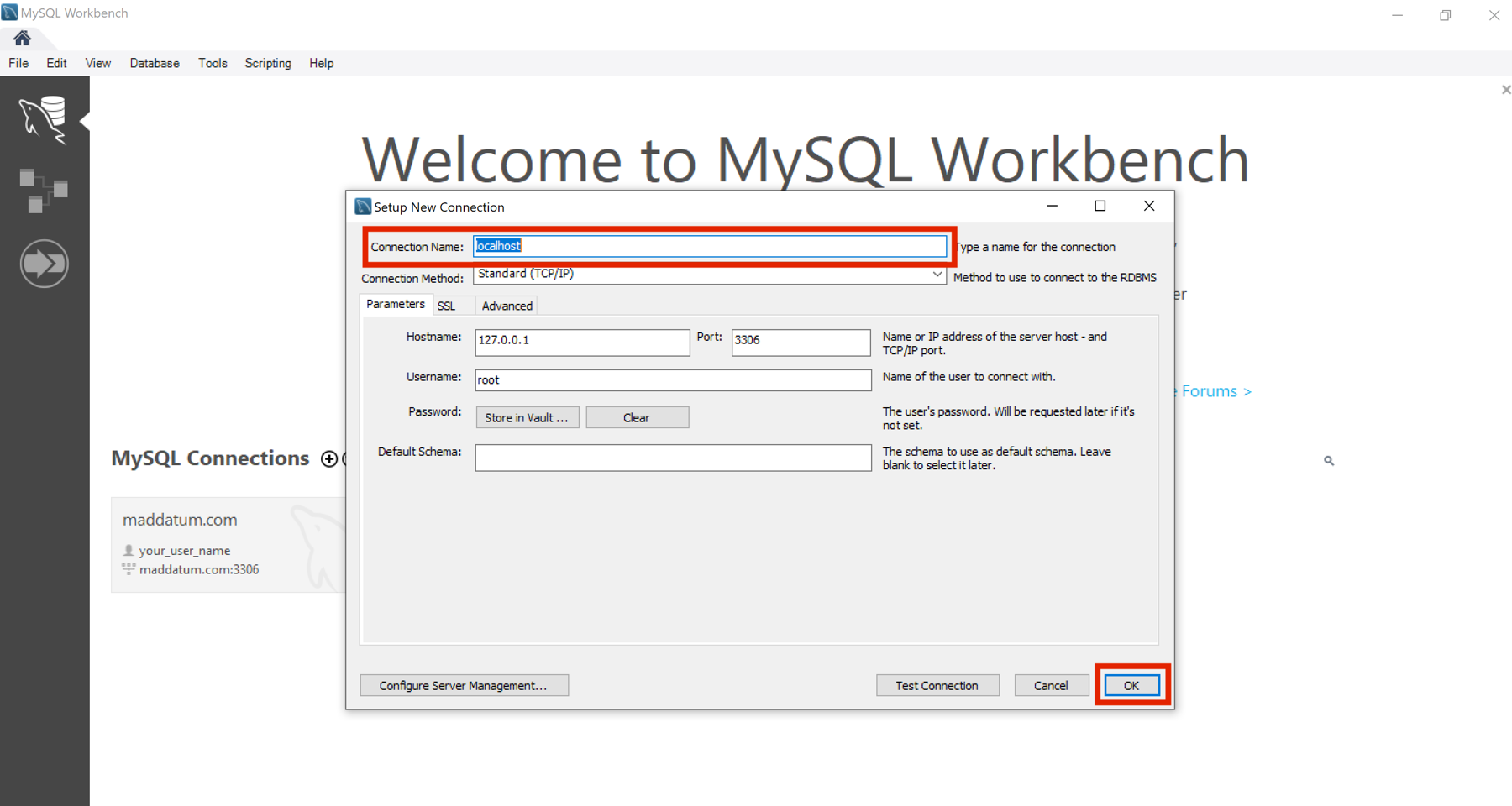 Let’s run a command to make sure everything is working. 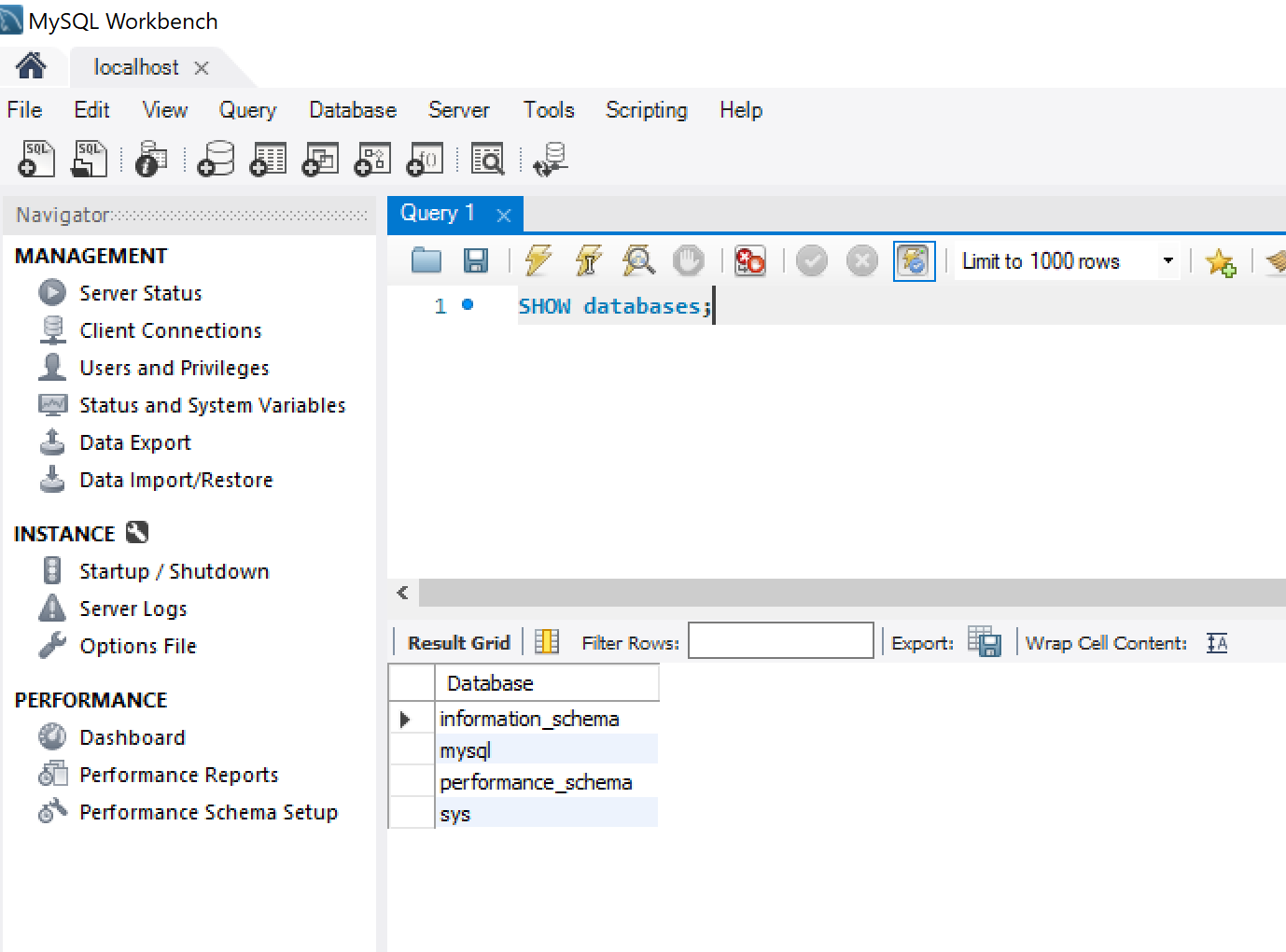 Before we create a table, make sure we are using the created datebase.

Now, we need to go over a bit of boring stuff before we get to loading the CSV. Sorry, I’ll try to keep it brief.

In SQL, every field has something called a “datatype.” You can think of a datatype as a tag on your data tell the computer how to read them.

Ultimately, a computer can’t make sense of any human-words. It has to convert everything into 0 and 1 before it understand its. If this conversion was left up to the computer entirely, it might see a word and say, “Oh, yah, this is one of those French words,” when it is actually English, thus, the conversion to 0 and 1s are incorrect. 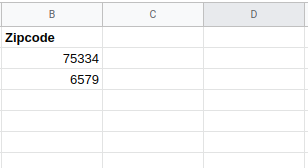 The data I actually provided the spreadsheet were:

Notice the zero in front of 6579, this was due to the computer saying, “Oh, these data look like numbers–and since the human didn’t tell me otherwise, I’m going to treat them like numbers. And, well, it is perfectly valid to drop the leading zero of a number.”

I wish all datatypes were this simple, however, the above example is about is simple as it gets. We can try to skip over a lot of nuances of datatypes and focus on the three we will probably see the most:

Here are what samples of the above data would look like in a spreadsheet:

Dates are pretty straightforward, they store a year, month, and day as a number. However, when we retrieve this number it is put in the human readable format listed above.

Time is exactly like DATE, but it also includes hours, minutes, and seconds (sometimes milliseconds).

An INT stores a number no bigger than 2,147,483,647. However, one thing an INT cannot do is store a partial numbers. For example, if we try to store 0.5 in an INT field it will probably get converted to 1.

CHAR is meant to store human readable text. When you put data into a CHAR field, the SQL program knows this is human readable information and doesn’t try to figure it out at all. It leaves it literally as it is. This is why CHARS are known as “literals.” They are also called “strings,” because the computer seems them as a bunch of characters strung together.

In SQL there are a lot of datatypes, however, some you may never need to use. One way SQL is a bit different than a spreadsheet is it wants to know ahead of time the size it needs to make the field.

This will mainly impact us when dealing with CHAR. When the SQL program creates a CHAR field it wants to know the maximum number of characters which will ever go into the field.

One important note, if you put a single character in a CHAR(5) field, then the SQL program will fill in the other four characters with a NULL. In short, a CHAR field will always be full.

There is another type of character field which allows you to put more or less data than was decided at the beginning. The VARCHAR datatype stands for “variable character” field. It will allow you to store up to 65,535 characters on MySQL. This is around 3 pages of text.

Why have CHAR at all? Shouldn’t we always use VARCHAR for everything just in case? Well, usually, but not always.

Often, when you design a database you want to make it as efficient as possible (I mean, it’s going to be successful business product, right?). The maximum size of the data a human will try to stuff in the field is important to the SQL program, as it tries to store data in such a way it minimizes space used and maximizes efficiency in retrieving the data.

In short, CHAR has a few advantages for your database. And take Social Security Numbers, if your database has to store these data then it should probably be a CHAR as these data have historically been 9 characters (11 if you include dashes).

Pop quiz, why don’t we store a Social Security Number as an INT?

Ok, I’ve put you through a crash course of datatypes to get you to this point.

We are going to: