For a long time now I’ve put off learning JavaScript. It really never interested me. I’d like to say it was the thought, “Oh, JavaScript is for web developers and I’m embedded all the way!” But that wasn’t really it. I think it hasn’t appealed to me because I couldn’t connect it to hardware. Well, at least, that was my assumption.

It’s pretty amazing. It allows a developer to write asynchronous JavaScript using Promises to get into the hardware of the client’s PC, all from the browser! 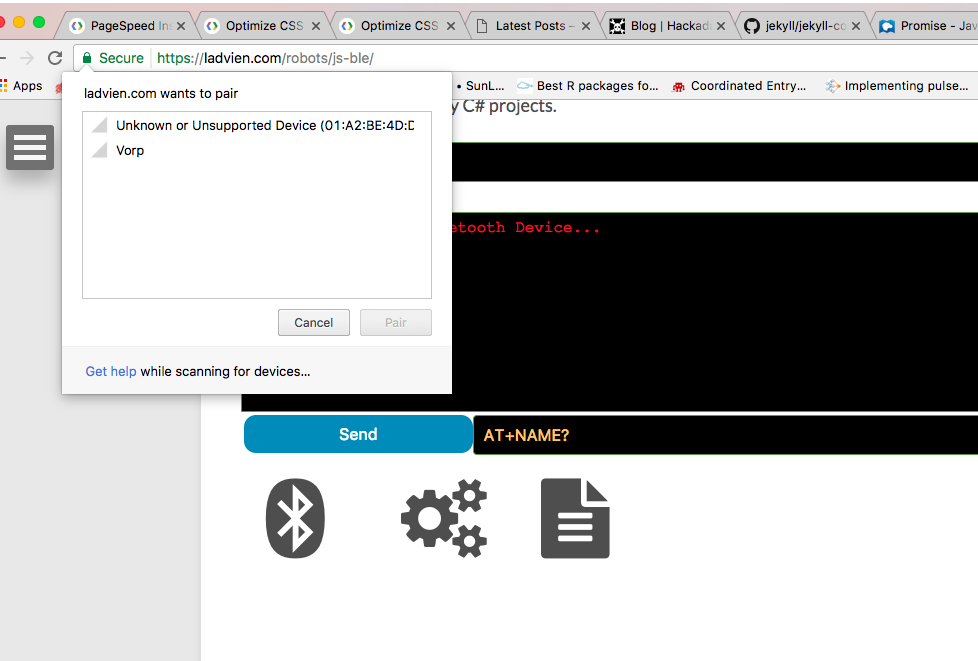 Ok, there are few other downers to talk about. First this only works in Chrome–but given this is a Google API, well, duh. The other is not all OSes are currently supported. The following I’ve tested and work right out of the box:

The others which are supposed to be supported but I’ve not tested:

Having worked with Bluetooth LE on all of these OSes I can say there is hope for Windows. In fact, I think with the Creator’s Update the Microsoft folk opened up the last needed ingredient. The real hold out will be iOS. Apple is not a fan of browser apps. They would much rather browsing be done inside their native apps. If I’m being positive, I’d say this is so Apple can make sure the mobile UX is excellent, and by forcing native apps, they have control by app approval. If I’m being negative, well, Apple takes 30% on app purchases and web apps land them nada. Just my opinion.

If you’d like to stay up to date on compatibility of BLE in the browser there is a an implementation status page on the Web Bluetooth Community Group:

Moving into the fun part. Below is how to kick things off.

To begin, it will pay to keep the Mozilla Developer Netowork’s Web Bluetooth API open for reference.

The documentation is actually pretty robust–and with this guide, the process of subscribing to a device characteristic should be pretty straight forward.

The first piece we need are service IDs to search for.

This takes the text element of the DOM element ‘optionalServices’, which should be in the in 16 bit hex format, 0x0000. This becomes one of the service IDs searched in the Bluetooth LE search cycle. For the Bluetooth module HM-10, HM-11, HM-16, HM-17 the service ID is 0xFFE0.

Moving on to the search, when the code below is executed the Chrome browser should show a search and pair menu (see image) for pairing a device. When a device has been paired the promise will resolve returning the device which has been paired.

It is important to note this block must be called by a user action. For example, if set to execute on page load it will refuse to fire. But if called onClick then it will show. This is meant to provide more security to the API.

As stated, the requestDevice will return a device. Using the promise .then we can begin working with the BluetoothDevice

Which is returned after it has been paired by the user. The BluetoothDevice object has three items of interest.

The BluetoothRemoteGATTServer interface contains many of the methods needed to interact with the Bluetooth device. For example,

Attempts to asynchronously create a connection with the device through a Promise. If .then is attached then the method will return a service object if succesful. If you are just looking to get something done with Bluetooth, feel free to keep hacking through this article (that’s what I’d do–TL;DR). However, if you want to know more about Bluetooth 4 protocol here a few useful links:

Back to the code.

Once the connection attempt has been made and returned succesful, the BluetoothRemoteGATTServer object returned can be petitioned for a list of services.

This will fire asynchronously using promises, and if succesful, return a BluetoothRemoteGATTService object. This represents all the services the device has public. Then, the returned service object may be iterated over to identify get characteristics of the device. (Almost to the data, I swear).

Essentially, the BluetoothRemoteGATTService object is merely an array containing on the services. Using a services.forEach we get each individual service to explore its characteristics.

Now, I’m going to add the whole block which is responsible for iterating over each service and its characteristics, essentially turning on notifications for each device. This will ultimately allow a callback to be fired every every time the device sends data and a reference to a method by which data can be written to the device.

The queue is a promise which allows us to loop through services and characteristics without breaking asynchronousity. Since this is my first JavaScript program, I will not try to explain it, but here’s another guy’s article which attempts to explain it:

Now, it should be noted, this above code is hackish. For example, what if there are multiple characteristics and the last one isn’t the one we want to know about. Well, we’d have a write reference to the wrong characteristic. So, filtering to the desired characteritic is on my TODO list.

But, let’s finish before refactoring.

Let’s take a look at how to write data to the device after getting a reference to the desired characteristic.

The above method creates a promise and writes to the device asynchoronously. On the way, it checks to make sure the device is paired (not connected, that’s on the TODO list). Also, it makes sure we still have a reference to the writeCharacteristic. Then, it will either encode it in utf-8 and write the data, or if the string argument is false it’ll just write the data. After it has written the data, the resolve is executed. This would allow the writeMethod to be called like so:

Ok, last bit. Let’s setup capturing incoming data. To begin, I created a method which holds a list of all the callback methods to call when data has been received.

This method allows a method’s name to be passed in. It then adds an event listener to this method, which will be called whenever characteristicvaluechanged. Also, it saves this method’s name in an array in case I want to stop notifications later (again, not completed, but on the TODO).

The purpose of allowing multiple callbacks is for when I’m working with many modules which all would like to know what’s going on with the Bluetooth LE device.

For example, this module is meant to be a piece of a larger project, which is an uploader app using BLE to upload HEX files to AVRs running TinySafeBoot.

Ok, one last piece. Let us see what the onRecievedData callback could looks like:

This is how I’ve written the notification of data callback. The event.target.value contains the data, which is in an untyped array. I choice to encode it into Uint8 as I’ll be working with both ASCII and non-ASCII data.

Well, that’s it. This code will allow one to search, connect, write data to, and receive data from Bluetooth Low Energy devices from Chrome browser. Let me know if you have any recommendations.

Here is the full code referenced directly from my project: