They might be small, but their extraordinary contrast and viewing angle more than make up for it. Plus, I mean, c’mon, they’re $5. I will say I was a little annoyed that they operate at 3.3v. And I’m sure this means I’ll be making a small little level converter board for them pretty soon. I estimate the converter board would be around $1.25, simagestill a good price.images

The only downside that really jumped out at me was the libraries are about 9k flash uploaded. The 64x64 LMR Bot was around 1k.

imagesWhen I got them I was worried I wouldn’t be able to use them without digging into the datasheets. But come to find out, they were exactly the same unit as on Adafruit’s boards. Sorry, I love you Ada…but…can’t afford $19.50. Now, maybe if Becky Stern came with them. Erm. Anyway, with Ada’s excellent guides and software I had the LMR Bot moving around in about 10 minutes. So, I’ll end up buying something from Ada to monetarily say, “Thank you, love.”images

I know, I know; I’m working on a converter adapter to make tha all those wires go away. 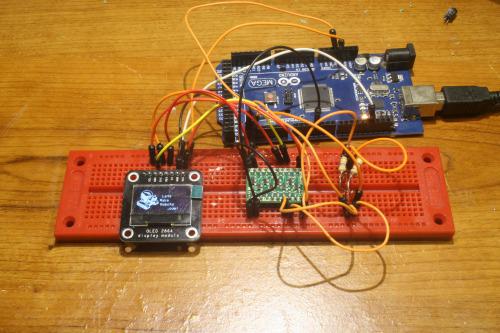